Since the very birth of nasal surgery, in order to address a whole variety of functional and aesthetic problems, the closed approach has been adopted for the nasal septum and pyramid by means of incisions inside the nasal cavities.

The lesser degree of invasiveness, together with the possibility for surgeons to feel the osteocartilaginous nasal structures with their own fingers and decide upon their anatomical correction, have made rhinoplasty with the closed approach one of the most fascinating and difficult operations in aesthetic surgery.

The results obtained with this approach still prove satisfactory today, as in the past, as long as certain prerequisites are complied with. On the one hand, closed rhinoplasty makes it possible to obtain excellent results with quick and precise execution in cases where a hump on the nasal dorsum is combined with nasal septum deviation and turbinate hypertrophy. On the other, it entails the risk of postoperative asymmetry when used to address major defects of the nasal tip, requiring sophisticated procedures of reshaping. I am also convinced that it presents further limitations in secondary rhinoplasties, whereas the greater exposure of the anatomical regions offered by the open approach can lay the foundations for complete success.

The open approach is not a different surgical technique, but only a different surgical approach to the nasal septum or pyramid with respect to the classic endonasal approach. A nasal surgeon should be a master of both approaches. There are no dogmatic indications for either and the surgeon must decide on the basis of personal experience which would be better for the patient in question. The open approach offers some important advantages. 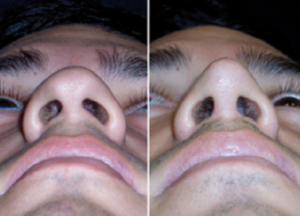 First of all, it eliminates the need to imagine the osteocartilaginous nasal structure, all of which can be exposed with no tension or distortion so as to arrive at a precise diagnosis of the factors responsible for nasal deformity. The rest of the team can also contribute actively to the operating surgeon’s decisions as happens in the traditional surgery of other areas.

It also makes it possible to place grafts easily even in areas that are almost inaccessible with the closed approach, which ensures lasting stability. At the same time, it should be stressed that the open approach is no more traumatic for the patient. On the contrary, bleeding can be monitored more precisely under direct visual control and no further incisions are required inside the nose.

The open approach encapsulates the modern concept of rhinoplasty, no longer designed to cut and remove structures but to rebuild and reshape while preserving the osseous and cartilaginous elements already present.

What is new today is the pursuit of perfect results without radically altering and hence weakening the anatomy of the structures involved. Thanks to a difference in approach, open rhinoplasty allowa a series of surgical procedures and concepts that can, in some cases, enhance the precision and predictability of the end result.

While a great deal has been said about the surgical techniques used to obtain the best functional and aesthetic results in the field of septorhinoplasty, equal attention has not been focused on the postoperative period and the techniques that can make it as atraumatic as possible.

The progress in nasal surgery over the last few years has been linked to the improvement not only of techniques but also of postoperative care.

Patients who undergo septorhinoplasty often complain about terrible problems in the immediate postoperative period, largely connected to the use of highly traumatic techniques. The most significant of these appear to be pain, bruising, hematomas, oedema, bleeding, lacrimation, and blocked nasal respiration. All this can scare patients to the point where they decide to forgo the operation or are unable to face it with the necessary calm.

The postoperative period of septorhinoplasty can instead prove nontraumatic and the patient can present a pleasant and socially acceptable appearance even on the day after. Attainment of this objective depends on the use of some intraoperative procedures designed to make the operation as “soft” as possible.

At the same time, while the open approach may seem more aggressive, in actual practice it involves fewer postoperative sequelae on the whole, probably as a result of improved control over bleeding and the absence of incisions inside the nose. Interruption of the internal mucosa disrupts the delicate vascular balance of arteriovenous and lymphatic drainage between the superficial and deeper anatomical areas, thus causing a thickening of the tissues that takes a very long time to disappear.

With a view to avoiding the traditional nasal packing, particular importance attaches to the execution of precise hemostasis, seeking out and blocking the points of most frequent bleeding. Internal and external suturing of all the incisions can also help to eliminate the need for packing except in particular cases.

The surgical protocol proposed for nontraumatic septorhinoplasty has proved particularly effective in ensuring an acceptable postoperative period essentially free from pain and problems. In actual fact, use of the above procedures makes it possible for patients to have a pleasant and presentable appearance even from the day after the operation.

Reconstructing the nose with the ear

Reconstructive rhinoplasty often entails the use of grafts for structural deficiencies caused by malformation, trauma or previous operations.

Despite the positive results found in the most recent literature for certain alloplastic grafts, the major case studies all recognize the complete reliability of cartilage grafts in rebuilding the nasal pyramid. Such grafts are in fact known to be easy to shape as well as resistant to infection and resorption.

Cartilage from the nasal septum, the ear and the rib can all be used in that order of preference. In the case of reconstructive rhinoplasty, however, septal cartilage is often not available or insufficient to fill all the gaps. At the same time, the use of rib cartilage can prove more complex and presents greater possibility of discomfort in the donor region. The use of grafts of auricular cartilage, mostly from the concha, has thus become increasingly popular with surgeons in recent years. Ease of removal, the absolute absence of deformity and visible scars in the donor region, and the large amount of tissue available are unquestionably the fundamental reasons for this preference. The auricular concha can be harvested on both sides, is easy to shape, and can provide grafts for reconstruction of the various anatomical subunits of the nasal pyramid.

The removal of cartilage from the concha can be carried out through a retroauricular incision so as to leave no visible marks. It should be stressed that painstaking preoperative analysis of the patient’s structural deficiencies is essential in every case of nasal reconstruction. This analysis can become even more precise in the course of an operation by using the open approach, which gives visibility to any possible issues. The harvesting of auricular cartilage should be carried out in this perspective, taking into consideration the precise reconstruction of the missing or weakened anatomical structures.

On the left the ear before sampling.

In the center the boundaries of the portion of cartilage being removed.

THE PATIENT JOURNEY BOOK A CONSULTATION
Scroll to top